Obama or Kennedy? It seems that the Obama clan wants to follow the lead of the Kennedy clan: explosure of a neat and clean loving family, frenzied crowds, loved or hated; they’re a real rock star family! (careful the Osbourne!)

While Barack has started his Middle East tour and is being criticized by Al Qaeda, his wife is acclaimed for her clothes (trust me!). United States president is at the moment in the Middle East in order to “smooth over the current situation”. We all knew it was not going to be easy, Rome wasn’t built in a day. Obama’s nice speeches won’t be sufficient to convince Al Quaida’s members who judged his visit as “ridiculous” and considered it as a show off performance.

“You can’t please everybody” as we say, but at least we can count on Mrs Obama! After being largely criticized for her clothes, she’s now seen as an icon! According to Mandy Norwood (editor), she even beats Jackie Kennedy! Mandy prefers Michelle for finding her clothes more affordable, she might wear less expensive dresses but this is why people can identify themselves with (in time of recession, that’s the least we could expect!). At that rate Mrs Obama is going to wear a Wordans custom t-shirt next month…why not?! It would be fun to have America’s first lady wearing cool t-shirts!

I think we’ll have to work on special Michelle designs for our next t-shirts…till then you can still support her sweet heart with one of our funny tee shirts, and if you feel like it, you can even create one with Ben Laden…it’s up to you! 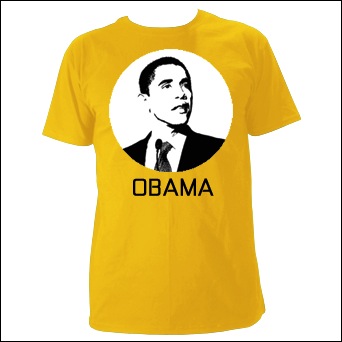 One thought on “Barack or Michelle’s t-shirt?”